How can you test economic theories in practice? That is not easy. Probably the best way is to compare the level of prosperity in different countries that are more or less located in the same area (continent), but have made different choices when it comes to economics and politics. For this purpose, Europe is a good “laboratory”, also because there is a lot of data available. For example via the European Central Bank (ECB).

The graph below is based on data from the ECB. Shown is the level of prosperity in several European countries. Actually it compares the buying power of the people in different countries, related to the price level in that country. The graph is based on two dates: 2004, four years ahead of the credit crisis with the Euro slowly gaining the status of a second reserve currency. And 2015, seven years after the outbreak of the credit crisis. 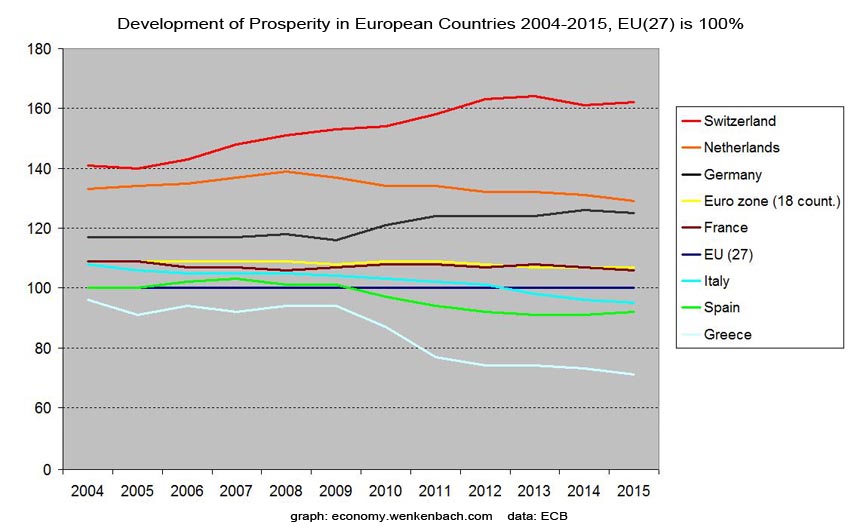 Germany and the Netherlands

Within the Euro zone, Germany and the Netherlands are often seen as the strongest countries. What these countries have in common is a total tax burden of about 50% of their Gross Domestic Product (GDP). Both countries do have a relative good budgetary discipline when it comes to public spending. Although the national debt is increasing steadily, it is still not out of control. Politically seen, these countries are characterized by an all-encompassing welfare state, a constant increase of public spending and an extending regulatory system. In order to be able to finance this, the tax burden has roughly doubled the last 50 years. The principles of a free market are much more constrained than one should think at first glance.

A country like Italy differs in particular from countries like Germany and the Netherlands by the way the public deficit is being financed. This is done by means of inflation (before these countries joined the Euro zone) or via financing the deficit by borrowing money on the capital markets. That this practice is very harmful for an economy is clearly visible in the graph.

Countries like Spain or France appear to be much more similar to Italy than to the North European countries. And Greece has, besides other problems, an even greater lack of discipline, when it comes to public spending.

There is one country in Europe where the principles of the free market are still respected to a large extent: Switzerland. And on top of that, public spending is based on a budget that is at least balanced. The total tax burden is roughly 33% of GDP. This is the case, because the voters have made different political choices over a long period of time. The positive effects on the level of prosperity are clearly visible in the graph. A free market and small government are obviously beneficial. Especially for the middle class and actually for everybody who is working. And working is what the Swiss do, because there are jobs. The rate of unemployment is already for decades between 2,5 and 3,5 percent. And for people who really can’t work, there is a good social security system.

Do you want to know more about the level of prosperity in different European countries, the economical explanation for this and the political choices that can be made? And why this leads to such a difference in prosperity, as is so clearly visible in the graph? Then my book Economie, Politiek en de EUrocrisis (for now only available in the Dutch language) is certainly of interest for you. You can buy it here directly.